Since 2008, Airo Mechanical has made their mark in the HVAC industry with 25 years of mechanical experience. Focusing on multi-family services including garden-style, student housing, rehab projects and more, they take pride in being hands-on leaders. Airo Mechanical has a strong emphasis on business development, education and quality standards.

We got a chance to chat with Jeff Hunley, Plumbing Director at Airo Mechanical to discuss how our Trimble Technology has made a significant impact on not only their plumbing division, but on the overall company. With 26 years of plumbing experience, Jeff joined the Airo Mechanical family back in 2019 to help kick start the plumbing division. It was also last year that they made the decision to purchase their first Trimble Robotic Total Station.

Through Jeff and his teams’ research, they discovered Trimble which already rung familiar. Jeff explained, “We want to stand out from our competitors. We’ve seen other trades use Trimble, but I haven’t seen any plumbers use their products so we really wanted to separate ourselves from the rest.” Lucky for them, they did. Airo Mechanical
ended up purchasing a second RPT600 as it “proved itself time and time again,” according to Jeff.

Airo Mechanical owns the RPT600 and the T10 tablet which they use in combination with traditional methods such as string line and tape measure. Currently, they’ve been following up their traditional work with the RPT to double check points, as it’s proven to have much more accuracy which, in turn, has saved them thousands of dollars on past jobs. In a recent project, located in the Charleston, SC area, they were getting ready to put down concrete for an apartment complex when they discovered upon arriving to the job site, that the points were actually incorrect. Thanks to the RPT600 identifying the error, it ended up saving them a whole slab of concrete which equates to $30,000. Not only is the RPT cost effective, but it also saved Airo Mechanical a lot of time. Another success story was for the Mallard Point Project in Charlotte, NC where they needed to do small podium layout work with concrete floors. Using the RPT, they were able to get this done much faster which, in turn, increased overall efficiency for the project.

With traditional methods, the biggest challenges for them are human error and time consumption which Trimble Technology ultimately combats. Using Trimble Technology as a double check system is a great way of slowly weaning off traditional methods and adjusting to the technology that is prevalent in the industry today. Eventually, Airo Mechanical plans on converting to much more frequent and advanced usage along with training all their workers to use it as well.

“When Scott came to us and demoed the RPT600, it was a no brainer.”

However, Trimble equipment has done even more for Airo Mechanical. Due to its positive results, Trimble equipment has even brought them in more business. From January 2019 until now, they have racked up close to $25 million in contracts using the RPT600 and Trimble T10 Tablet. They currently have about 19 active jobs and counting. Airo Mechanical wanted to stand out from the competition, and it sure sounds like they have.

Like many businesses, Airo Mechanical saw that they needed a change in their workflow and felt that Trimble Technology was the way to go, but we know that learning new equipment can be overwhelming. With the help of our RTS sales rep Scott Mayer, he was able to get them up to speed and comfortable with this exciting switch. According to Jeff, “Customer service has been excellent. Scott was very attentive; not only did he come up two times to demo the product, but he came back a third time for the owner.” He explained how Scott was very knowledgeable, easy to work with and even more helpful after the sale. At BuildingPoint SouthEast, we don’t just end our relationship at the completion of purchase. We consider ourselves a consistent, reliable service for our customers to ensure their success.

VDC HAS TAKEN NEW HEIGHTS AT THE CHARLOTTE-DOUGLAS AIRPORT 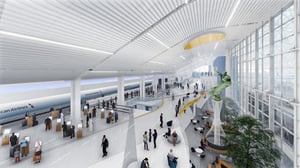 Our VDC/BIM services use digital tools to create virtual models of buildings allowing teams to view what they’re working with before the building process starts. For Bonitz, VDC technology became a valuable asset in their most recent project with the Charlotte-Douglas Airport. The Terminal Lobby expansion started back in 2017, however 6 months ago Bonitz brought in Ryan Pastor, our BIM/VDC Specialist, to help take their drawings from paper to reality. This expansion will create additional space for security lanes, ticketing, and baggage claim areas, as well as increased circulation space in the lobby. Bonitz has been focusing on the ceiling work which is where VDC came into play to ensure proper coordination when designing the placement of lights, diffusers and sprinkler heads.